It is with great sadness that we announce the passing of Russell Malmberg (1952-2023). Our thoughts are with his wife Donna Carney and his family. Russell was a UGA University Professor and an integral part of the Department and a loved colleague. He joined the Plant Biology Department in 1985.

During his long career at UGA he was an inspiring teacher, researcher, mentor, administrator, colleague, and friend. His curiosity and intelligence made Russell a natural for exploring technology and its relationship to scientific data, leading to research advances in plant biology, computational biology and bioinformatics. He was an early adopter of new scientific technologies and was generous in sharing his expertise with students and colleagues. He was a champion for women's advancement in the sciences. Over the years he served as major advisor for thirteen graduate students, six postdoctoral scholars, and 21 undergraduate students. Russell’s calm demeanor, ability to get things done, and sense of humor also made him an ideal academic leader and an excellent mentor to new faculty.

He served as Director of the Plant Center (1999-2002), Head of the Department of Plant Biology (2002-2007) and Associate Dean of the Franklin College of Arts and Sciences (2007-2017). He also served the University on more than 50 committees and task forces, many of them as chair. He played an active role in many innovations at UGA including the establishment of the Institute of Bioinformatics, the Young Dawgs Science Internship Program, and the Science Learning Center. Practical as well as funny, his dry wit brought many smiles. In recognition of his many contributions to science he was selected as a fellow of the American Association for the Advancement of Science and named a University of Georgia "University Professor" in 2014.

A ceremony for friends to remember him will be held at a future date. In lieu of flowers, please donate to your favorite charity or consider one of these: UGA Plant Biology Department Grad Student Award Endowment  or Doctors Without Borders. 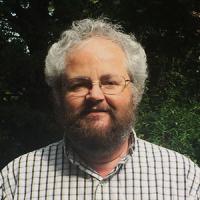