C.J. Tsai, Georgia Research Alliance Eminent Scholar, and her research team have developed a new way to speed up the study of flower characteristics in poplar trees. Poplar flowers play a vital role in tree reproduction; however, they typically take around 7 to ten years to first appear on trees. This long time frame significantly increases experiment time in comparison to other common crops. The Tsai lab used CRISPR technology to speed up flowering time to just a few months.

CRISPR is a gene editing tool used to manipulate an organism's DNA. These manipulations can be used to “shut off” genes, edit individual base pairs within genes to change amino acids, or add new genes to an organism's genome. Tsai and her team used CRISPR to edit a flower repressing gene in poplar resulting in the early flowering trees. These early flowering trees can be further edited with CRISPR to investigate how other changes to the tree's DNA will affect its response to cold and drought conditions, and even influence whether a tree produces male or female flowers.

Ran Zhou, a postdoctoral associate in the Tsai lab, used CRISPR to switch female flowers to male flowers by editing female-specific sex switch gene. Normally it would take years to confirm such a successful sex switch, however using the CRISPR- edited early flowering poplars it only took a few months to see the results.

Poplar is an economically important tree crop; it is commonly used in the furniture industry.  It is also one of the most sustainably grown tree crops and serves a vital role in CO2 capture and water purification.  Research in the Tsai lab can not only help us better understand how this important crop may respond to climate change, but also potentially lead to new poplar variants that can better deal with more extreme environmental conditions.

You can read more about the projects here. 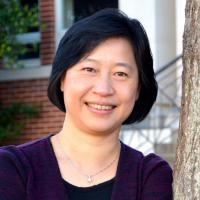